January 2019 Blog … What is meant by Level I, Level II and Level III charging? 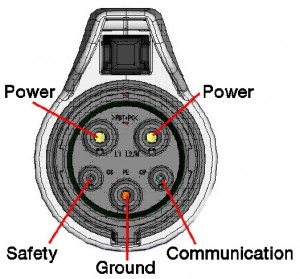 How do I test for communication with a EV and the charger?

This is a Single Phase Alternating Current (AC) EVSE device using grounded receptacles at the most commonly available voltages and currents. In North America this typically means 120V/16A using a stand home grounded outlet. The EV owner uses their own standard charging cord (it came with the EV) that includes a J1772 end (the part that connects to the port on the car) and plugs that cord into a home electrical outlet to connect the vehicle to the grid. It is sometimes called a trickle charger.

This is a Single or Three Phase Alternating Current (AC) EVSE device at 208-240V at up to 80A but seldom uses more than 45 amps now but to “future proof” a level II EVSE there are 80 amps units for sale. The SAE J1772 document is the standard for Level II charging in North America, where the J1772 connector and charging cord are permanently fixed to the Level II charging station. These Level II EVSE are installed at homes and businesses.

Level III  This is a specification that is not in use, but is often used to describe Fast Charging.  So to be technically correct call a Level III charger a Fast Charger and those with lots of training will recognize that you have studied well.

Now we have a DC charger or “fast charging.” To achieve very short charging times, Level 3 chargers supply very high voltages (300-500 volts DC) at very high currents (100’s of Amperes). SAE has set a standard for this type commonly called the “combo plug” used by American, European OEMs and Honda. Most Asian brands use a different plug called CHAdeMO, such as Nissan, Kia and Mitsubishi. Both the Combo and CHAdeMO do the same thing, charge a HV battery very quickly. Chevrolet says the Bolt, supported by Level 3 charger (CCS) can gain 90 miles (145 km) worth of range in 30 minutes, 160 miles (257 km) worth in 60 minutes, and a full 238 miles (383 km) of range in about two hours. In colder weather it takes somewhat longer.