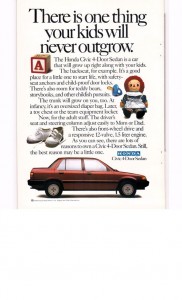 If you’ve been running a shop any length of time, I’m sure you run into the “trunk full of things” when you want to “just do the right thing” and check the air in the spare tire (if they have a spare!) I started my shop in 1977. We worked exclusively on Honda cars and Honda had full size spare tires for a long time. If it was a hatchback there was a lot less stuff back there, but the trunk was really a place for people to store their junk. Sometimes you would learn a lot about a person based on what you pulled out of that trunk to get to the spare tire. Getting a flat back then, in strange place, made car owners take care of their own flat on the side of the road. This was long before we had cell phones. I had this one customer when I was in my twenties who was a political activist and she was probably all of 70. The signs in her trunk were all about the feminist movement because it was the seventies. I was intrigued by her signs, but mostly by her actions. She would literally go out and protest on the side the road or march with people so women could gain the rights that they were denied.  I admired her and loved to visit when she had her 4 door Civic serviced at my shop. I was talking to an older woman at Church this month about that experience and she related to me that when she was in college her parents they told her “the reason why we are sending you to college is to find a husband”.  That was not the reason why she went to college … so after the first year she was back home talking to her parents again and they asked her “did you find somebody?” Her answer was “no”. She explained that she went to college to learn and educate herself about the things that she wanted to do in her life. She also became an activist. She was in college in the fifties when I was just a boy. Another amazing woman.

The next time you are checking somebody’s spare tire in a messy trunk, note what the protest signs say, if they have any. You will know what is left to be done in America as the work in not finished yet. “Black lives matter” or “Ban the Bomb” or a whole host of other things are on people’s minds. Rather than get upset about what you don’t like on that sign, remember; the people that are out there are not holding a political office, usually not wealthy and many times not in any high paying job because if that was the case, they probably wouldn’t protest for fear it would affect their job or their career or their standing in the community. These people, in this case these older women, really made a difference. As I head into my somewhat senior years thinking back as a young man in my twenties and thirties how much I admired these woman, I really wish I could remember their names. But I do remember she drove a Honda Civic 4 door Sedan. My wife, Deborah, was visiting with someone here in Worcester. Deborah has taken my last name so when Deb was introduced, this woman told Deb “my mother had her car serviced at your husband’s Honda shop” and as they visited it was clear that her mom was that woman. It was that woman who had protested. It was that woman that gave me a reason to write this article and think about how important older people are, men and women. People that show the younger ones what needs to be done in a democracy. Those who stand on a street corner with a whole lot of people just holding a sign asking people to remember our veterans, our poor, our hungry, or whatever it is that is “right and just”. People with a conscience that know what needs to be done, at Christmas and all year long. Are you that person?