What is wrong with Craig?

When my dream of opening Van Batenburg’s Garage (VBG) back in 1977 was realized, I was a 26 years old. So much has changed and so have I, but my desire to make my way in the business world hasn’t. For those of you that have trained with me, you may have heard this story.

My minister, Rev. Aaron Payson, gave a great sermon a few years ago. He explained to the congregation that sometimes you will meet someone that you just can’t understand and maybe don’t like.  It is not uncommon to say under your breathe “What is wrong with that person?” Aaron suggested that that is the wrong question. “What happened to you?” is much more informative.  With that in mind let me explain what happened to me. 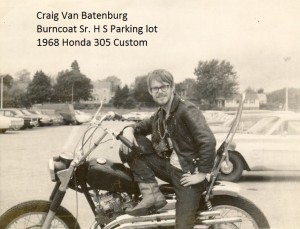 In the fall of 1972 I was “voluntold” that I was going to Cherry Hill, New Jersey to Honda school for a week as the Civic was coming to America. I was a Honda motorcycle mechanic and I was not too thrilled with the idea of hoods and fenders in the way but I went. Something about payments on my Toyota Hi-Lux and an apartment.

What happened to me changed my awareness in a way that set me on this road for life. Honda had invented a unique cylinder head design called the CVCC. See my previous blogs for more on this. The Environmental Protection Agency (EPA) was created that year and the automotive industry was either fighting the new regulations (guess who) or designing engines to comply. Honda was doing the latter.

At Honda school, the first four hours on the first day, had nothing to do with the Civic. We all went back to science class and learned about HC, CO and NOx. We saw pictures of smog in Los Angeles and smoking tail pipes. We learned about lung disease and asthma. We were told about the EPA and what was coming. It wasn’t pretty. The job was in front of us was clear; clean up the air. I drank the cool-aid and never looked back.

Honda was “the leader” back then in compliance and innovation when the CVCC engine made its debut. It made an impact on me. Technology doesn’t have to be bad for the planet. Two years later VBG opened up and we specialized in Honda for 26 years.

When the Honda Insight hybrid went on sale that 21 year old kid (now 50 years old) bought the first one sold in Massachusetts (still have it). Cars got a lot cleaner and safer (unfortunately the drivers did not) and my passion for a cleaner planet never died. Today, it is about reducing carbon in the atmosphere. Honda is responsible for me (and a lot of others) in seeing a brighter, better and cleaner world where cars (and motorcycles) are not burning fossil fuels but charging up on sunlight. Honda had a dream and shared it with me over 40 years ago. We still have a lot of work to do.

So that is what happened to me. Now you know “What is wrong with you Craig?”