Here is an Interview with a Battery Engineer 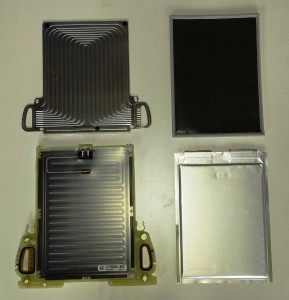 What dangers do lithium-ion batteries pose?

You can get six times the energy density in a lithium battery that you can in a lead-acid battery and two or three times as much as in a nickel-metal hydride battery. Any time you pack more energy into a smaller space, your safety concerns go up. All the lithium-ion systems being tested right now use an electrolyte that is flammable, so one of the safety issues that we are very concerned about is how these electrolytes can burn when the cells have been ruptured. They can also be heated to the point where the electrolytes break down into gases that the cells vent.

What kinds of abuse tests do you perform on the batteries to simulate real-world scenarios?
One of the mechanical-failure scenarios we test is a crush. We’ll take a fully charged cell or a full pack and put it into a hydraulic fixture where we slowly crush the entire pack at a very controlled rate. We have temperature sensors all around the pack and real-time gas analysis to monitor the gases coming out of the cell. We test for flammability by using spark sources around the room to ignite the gases. Sandia also has a radiant-heat test facility where we can take a full battery pack, put it inside a system surrounded by quartz lamps and heat the pack to 932 F in about 60 seconds to simulate the entire pack being suddenly engulfed in flames.

Does your research suggest lithium-ion batteries are safe for cars?
Well, that’s a difficult question, because no one has defined what safe means. The energies that can be released are certainly less of a concern than driving with 20 or 30 gallons of gasoline. Are there scenarios in which the battery may get into an accident or an environment that causes it to burn? Yes, it can burn, but you’re not driving around in a bomb. There are some significant advances going on right now that are making these much safer to use.

Craig’s Note. The above article was sent to us. If you know the author we will post it.