We lost a Great Man and Friend 10 Years Ago. Remembering Stan Stephenson

February 8th, 2008. 2:12pm in room 676 at Bryn Mawr Hospital in Pennsylvania; Stan Stephenson, his son Peter, Linda (a very close friend of Peter’s), and myself were together holding hands, holding each other and saying goodbye to a Father, friend, and one powerful man. Stan, like so many men his age kept his problems to himself. He took care of business, made sure those he loved were doing well and stepped in when they were not. His list of admirers was long and over the two days he was in the hospital for the last time many of his followers came by to wish him well. Young and old, relatives and business related friendships. Stories were told in the waiting room and next to Stan as he lay in bed listening but unable to say much. Just 11 months earlier many of us saw Stan at his wife’s Adel’s funeral. That was when I met Peter for the fist time. Peter is an only child and lives in New Mexico. “Like Father, Like Son” the saying goes and it is true. Peter is also a lot like his Mother. So not even a year after Peter lost his Mom, there he is holding and kissing his Father as they say goodbye. The way many of us knew Stan was through Motor Age magazine and for the older friends Chilton and other auto related endeavors that Stan loved so much. But Stan was a Father and Husband. He knew his responsibilities in those roles and did his job. He also adopted, in a way, many interns that were lucky enough to pass the test of being worthy of Stan’s attention. One such lucky lady was Shahla. Shahla came to visit Stan the day before he passed on and she was very sad. Shahla and I knew each other so we spent hours visiting. We spoke about her relationship to Stanly, as some people called him, and it became clear to us that Shahla was the daughter Stan never had. Two other men, Tony Molla and Bill Canon, had also visited Stan over those last two days and they too knew that Stan has guided and shaped 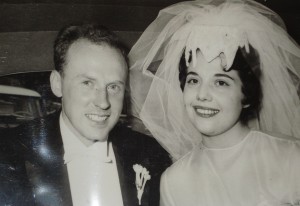 their lives in ways that a father would guide his son, the way Stan was with Peter. This surreal time was a moment for me to once again take stock of why we are here, the finality of death and how one can live his life. Stan Stephenson knew how to live, and how to inspire those that cared enough to be real. He hated anything phony, was never impressed with flash and glitz. What mattered to Stan was speaking up, truth telling, and keeping an open mind in the process. You always knew where you stood with Stan and how he stood on subjects that really mattered to him.

Stan was powerful. I have wondered what makes some men powerful and others not. A few years back I discovered that generosity and a deep understanding of responsibility made men powerful. Stan was all that. His giving of himself, his time, advice, getting his interns connected to their passion and to people that made jobs happen for them. Stan was smart and wise. He wrote about things that came true years later. Stan was leading the way for so many ideas whose time had not yet come but Stan knew it needed to happen and soon. Stan was a talent scout; he knew what people often didn’t know about themselves. He saw the good in you and if you were willing to hear it (not everyone was) he would point out the way to success. Stan left this world a much more honest place. He did his job well so Peter now can go forward with a gift of Stan’s making. Peter knows what is important. Peter had a Dad that knew stuff.