September 2013 Up Your Voltage to stay put

“Up Your Voltage!” has been a real blessing for ACDC. It has allowed us to experiment, learn, enjoy the company of over 500 people and move the class to over six sites in the seven years we have been offering “Up Your Voltage (UYV)”. Number 35 is coming up soon and as we look back, here is my reflection and some behind the scene stories. 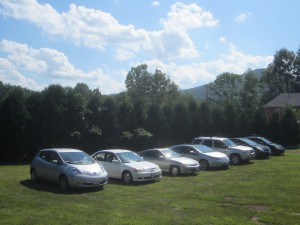 The ACDC Fleet has grown to include HEV -PHEV – EV

How did we come up with the name?  I like to learn and over 25 years ago I did a wonderfully strange men’s weekend.  Years later I was invited to an alumni reunion of that weekend called “Up Your Purpose”, a weekend that helped me have a bigger context of our world and a time to dream about what I could do to lead a better life that would be centered on helping others. In 2005 I bought a used Prius that had a couple of new window stickers in the glove box that said “Eat My Voltage”. One lives on the back window of our first hybrid, the 2000 Insight. Combine the two and we had a name for a new type of class.

Every Changing    By design, UYV was never intended to stay the same as the technology was new and we knew UYV would evolve along with the cars. Our first class was in Leominster, Massachusetts at D.J.s Automotive. 12 daring souls showed up. It was a blast and we knew we had something good here. Then another instructor saw dollar signs and asked if we could bring the class just north of NYC. The deal was he would enroll 12 people and ACDC would do the class. 3 weeks out he had only 3 people enrolled. Deb and I went to work, signed up nine more techs and the class went off as planned. It only looks easy. The third class was the charm. We moved it to larger shop near Providence R.I. named Wayside Automotive, added 4 more seats and we are still there.  That was 2006. We also tried California, Western Mass and North Carolina.  The classes went well at those sites but the time and expense to pack it all up and ship the cars was huge. No more moving everything thousands of miles. If you want “Up Your Voltage”, 6 days of intense training come see ACDC.  We will welcome you with open arms. The future for ACDC is very bright as you could imagine, but Up Your Voltage is only available in my beautiful home state of Massachusetts from now on. With more electric cars being sold driving them more than 100 miles from Worcester is tough. As you know ACDC owns a Leaf and more EVs are coming.

How did jumping in the ocean happen? After class on Saturday night at Wayside Automotive the students and teachers were bragging about the “weirdest thing they ever did”.  The stories were great and I added to the mix with my polar bear plunges I did in my late 30’s on New Year’s Day north of Boston. Yes it was cold! Jeff Finlay from Toronto, Canada asked me if I would take him to the ocean. He had never experienced the Atlantic. This class was in late November but of course I said yes. A few other brave men got up at 5:30 am the next day and off we went. To this day we go swimming regardless of the weather. We have the videos to prove it.

I will leave you with this. We have had just about everyone you could imagine at UYV and many spouses to boot, but the best part is getting together and learning from each other. Knowing that we really can make a difference in our communities by driving cars that will not make our Earth overheat is not a trivial matter and having fun doing it is a bonus.